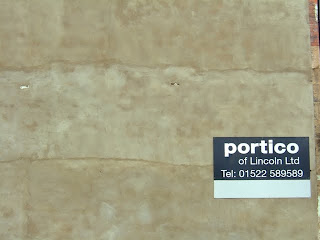 Another one bites the dust, this time for Blue Star/Regent in Lincoln.
This sign had real star quality, if you’ll excuse the pun, and featured from the Travel & Transport gallery in the series of postcards produced to celebrate the opening of the HAT archive. This is another piece of evidence for why the work we’ve done is important in keeping a record of what once was.

It looks to me as though the Portico people got annoyed by the more attractive old hand painted sign grabbing all the attention and so they took conclusive action. It would be interesting to know whether the covering could be removed to reveal the sign again once more, a pleasant surprise for some urban archaeologists in the future perhaps… I was alerted to this loss by Paul Turner who had used the Blue Star sign as inspiration for his own art work and here are the results. Pretty cool. In the second image, named ‘Lincolnshire Landscape’, you can see the sign in the top left of the image. The first one looks like it could be something from Cuba or Latin American revolutionary wall paintings…