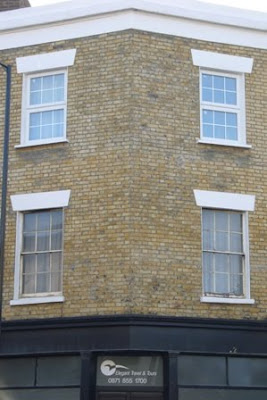 Again, this happened a little while ago but it was only today that I managed to get out with my camera to take a photograph. This was once one in a series of three palimpsests featuring signs for both Gillette Razors and Criterion matches (see below). It was probably the weakest of these three examples and was also partially obscured by the newspaper signs. It’s quite straight forward what’s happened: the developers have come in, sandblasted the sign and sorted out the window frames. Change in action.

The loss of this and many other signs is one of the reasons why the archive is an important piece of work. Please get involved by adding photos to Flickr and then committing them to the HAT Ghostsigns Archive.