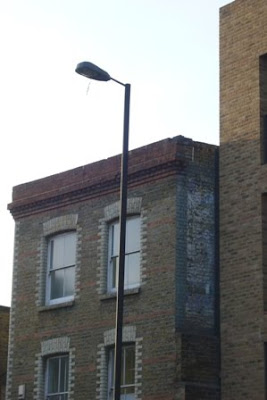 It’s been a while since this happened but those based in London may have noticed the erection of some new flats on Kings Cross Road which now obscure the vast majority of this BP sign that was once there.  This was probably to be expected given that every inch of spare land in London is being built on to handle the escalating accommodation needs of the city.

For a long time the sign had been covered by an advertising display and was then revealed in Summer 2007. I managed to get some photos of it in the time it was all showing and now it is gone forever, or at least until the new flats get demolished…

The loss of this and many other signs is one of the reasons why the archive is an important piece of work. Please get involved by adding photos to Flickr and then committing them to the HAT Ghostsigns Archive.