Its been a while since I’ve posted some images received and I’ll probably be doing less of this as the Flickr group for the ghostsigns archive is now the natural home for all submissions, at least those from the UK and Ireland.

However, I’ve been sitting on some pictures for a while now which its time to show off.  Sorry for the snail-like pace of doing so and thanks for sending through. See more in this Flick set. 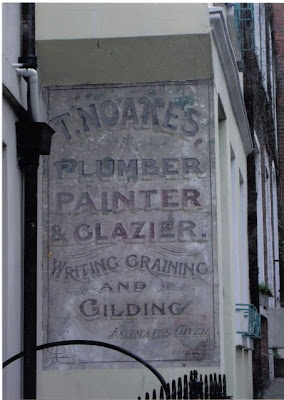 First up is this beautiful sign from Hastings which is a scan from a print given to me by Mark Novotny of the Old English Coffee Housewhere I used to get lunch most days (I only stopped because I changes jobs, its delicious there!). As its for a bit of an all round handyman who did paint jobs it was probably produced by T Noakes himself, showing off the skills that people could buy in to. Love it! 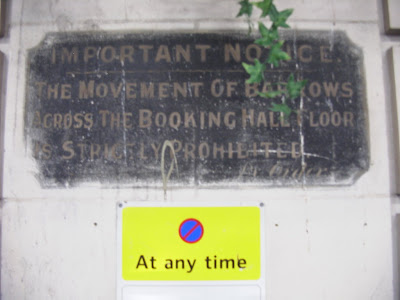 Next is this one from Russell Bowes which can be found on the road outside Waterloo Station in London. Its a fairly stern warning for those involved in the movement of barrows, interestingly they seem to have used a gold paint for this sign, perhaps symbolic of more affluent days for the railways… Bas Groes sent me this one which he spotted in Amsterdam. Its very faded but you can tell it was for a cafe and the premises are still trading as such. I was surprised to find very few signs when I visited Amsterdam, there must be some reason why different countries did and didn’t embrace the format as Belgium has huge numbers and is just next door to the Netherlands… Here’s anotherfrom the continent, this time sent to me by my mum and a very artistic piece for Pepsi-Cola. Its from Prague in the Czech Republic and is a striking example from this part of the world. Finally this example from London sent to me by Erum Waheed. Its for a Whisky Brand called Haig with the cracking slogan, ‘Don’t be vague, ask for Haig’. Reminds me of when Staropramen launched in the UK with, ‘Just ask the Barman for a Staropramen’ which never really took off as everyone now just says they’ll have a pint of Star. This sign (from another photographer) made it into the video montage for the Booze & Fags category of the ghostsigns archive.