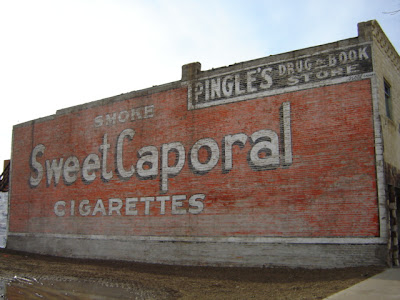 George from Alberta, Canada, sent me this great sign from a town called Medicine Hat and a bit of a story to go with it.
It is an example of ‘privelege’ advertising as the wall probably belonged to Pingle’s Drug & Book Store who would have given it over to Sweet Caporal in return for the relatively small plug in the top right corner. 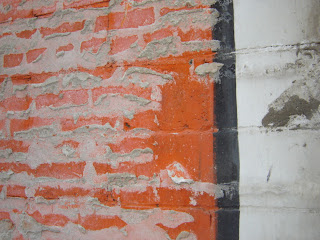 “A tragic fire August 28, 2007 in our Downtown core saw the destruction of a historic structure. The remnants of that building were razed and hauled away leaving a fantastic example of a “ghost mural” on the newly exposed building next door.

The building that was destroyed by fire was thought to be approximately 100 years old so this “ghost mural” is older than that. What is truly amazing, is that the mural is in such good condition. There does not appear to be any significant damage to it as this close up shows.”

This form of ‘reveal’ where an adjacent building is destroyed revealing an old hand painted sign seems to be much more common in Canada and USA than over here in the UK. I’m not sure why this is but may have something to do with the relative recency of development across the atlantic compared to more well established buildings in Europe generally. Any thoughts welcome…

Finally, a quick search on Google reveals that Sweet Caporal, or “Caps” for short, were a popular cigarette brand with some classic advertising from the 1950s! Thanks George for sending this through.
Share/Bookmark